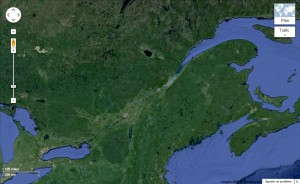 This river takes its name from Saint Laurent , celebrated on August 10, the day when Jacques Cartier sailed would for the first time on the river.

It is named in honor of Lawrence of Rome. ( Lawrence of Rome was born around 210 or 220 in Huesca, Aragon, Spain. He was martyred on a grill in 258 in Rome. It is celebrated on August 10. ) His father’s name Orence (or Orens in South -West of France ) , and his mother Patience. Cartier assigns the name ” Grand River Hochelaga ” in water and it explores the name ” bay saint Laurens ” to returning from the North Shore. Thereafter, the term Saint- Laurent is also applied to the Gulf and the river, which will be known as the “Great River of Canada” in the sixteenth century. In 1603 , Samuel de Champlain was first designated this river as the ” river of Canadas “, but after 1604, the founder of Quebec opted for ” great river of Laurens saint ” and ” holy river Laurens ” in his writings and his cards. This is the seventeenth century that the St. Lawrence River toponym eventually supplant its competitors .

The St. Lawrence River is a river from the Great Lakes . It flows northeast and empties into the Gulf of St. Lawrence and the Atlantic Ocean. There is a drainage basin of 1.61 million km2 (about 25% of the world’s fresh water ) including the Great Lakes, and a good portion of the hydrographic network of the continent, by a course of about 4000 km (1 140 km if we do not take account of the Great Lakes). It is part of the 25 longest rivers in the world. The Saint Lawrence River has an average flow of 12,309 cubic meters per second to Quebec.

Archaeological excavations to assess a Native American presence on the river close to 9000 BC. AD The river, before being renamed St. Lawrence River, was called Magtogoek or ” walking the path ” by the Native peoples inhabiting the region. > 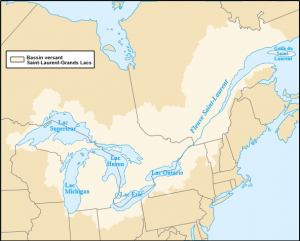 Moreover, it is still very plausible (pending concrete evidence ) that it was the Vikings who left the first traces on the land.
In 1534, the St. Malo Jacques Cartier takes possession officially on behalf of the king of France Francis. It is generally regarded as the discoverer of the St. Lawrence Valley . The rest is history .

Kébec means “place where the river narrows.” Since the founding of Quebec , there are 400 years , an estimated 40,000 ships were wrecked on the St Lawrence. The main difficulties are shallow in some channels , reefs , currents diagonal , fog and ice.

At Quebec , he currently spends about 6,000 boats per year. Many stop here, but others date back to Montreal and the Great Lakes that give access to the heart of the United States .